Koomba Kaos was the first Sportident event of 2022, and it proved to be a great way to clean out the cobwebs and kick our brains into gear, before a big summer of sprints gets underway.

The map was drawn in 2007 and has only been used a couple of times since.  We gave it a touch-up, but the vegetation in there changes as fast as the covid rules!  The ground had dried considerably, and thankfully the mowers had been in to some areas at least, so the decision to postpone paid off.   The day was warmer than predicted, and the large shady trees around the arena were a welcome place to relax before and after the racing.

Several controls required wading through very tall grass, but if you weren’t amongst the first couple of people, you found nicely flattened “elephant tracks”.  Some intrepid navigators chose the red line route, even when it crossed stripey or solid green.  The longer, but very runnable tracks were invariably faster, creating some good route choice dilemmas.  Winning times on all four courses were approx 25 minutes, in line with expectations of an extended sprint distance.

Some basic skills were required, the first one being instant orientation of the map.  From the start triangle there were numerous choices of direction. Each course had a different first control, and they didn’t give you much thinking time.  Courses then zigzagged around small buildings, tennis courts and carparks, into small watercourses and onto treed knolls, before heading into the Jazz Museum garden.

From there, the running became more straightforward, with some control picking legs along the power line, as the courses headed north.  The next section required decision making – should I plunge into the veg, or circumvent it? The shaded narrow tracks, boardwalks and bird hides were a feature of the mid course section.

Runners then found themselves in the more open eastern section, with pockets of pine plantation and eucalypt forest on the slope.  A final tight loop of 6 or 8 controls around the arena brought them into the finish; it was this last section where we expected fatigue to set in and mistakes to be made.

There were in fact quite a lot of mispunches, but not where or why we thought.  Although some people simply skipped a few controls due to the heat, the majority of MPs were caused by the same error.  As this was a warmup/practice event for the more serious stuff to come, it is worth a closer look to see why this occurred. 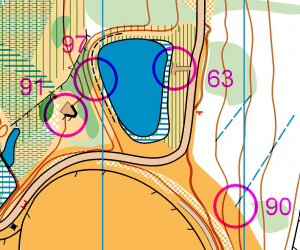 The controls in question were 91 (on Course 1 and 2) and 97 (on Course 3 and 4), so no course had both controls.  Control 91 was on a fence, and control 97 was on a vegetation boundary, right next to the dam, with a track leading in along the embankment.  On Course 1 and 2 (hard), the previous control was no 63, with the obvious route to 91 being the bike path south and east, past the dam, and looking for the vegetation change.  The approach was downhill, as shown by the contours, and across a small section of rough open ground, with thicker vegetation on your right.  On Course 3 and 4 (moderate and easy), the previous control was no 90, with a simple, open approach into 97, using the dam as the attack point.

Control 97 was easily visible on the approach.  However if you were looking for 91, then a check of the map, the control description, and the control number – not to mention finding yourself right beside a sizeable and very obvious water body – should have given plenty of warning!  So our sprint training tips are:

All in all it was a really good, fun event.   Thanks to the DROC team for organising and course planning, and to ARDF for providing the Koomba Park map.  With a major development planned this year for the sporting facilities, the next version of the map will look quite different.

If you enjoyed this event (or need more practice), look out for the upcoming MFR Sprints in January and February, before the hugely anticipated 2022 Melbourne Sprint Weekend in March.