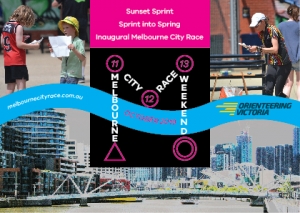 Discover Melbourne from a new point of view!

The first Melbourne City Race was a huge success, with plenty of local stars pitted against international competitors from the UK, Russia, Sweden, Switzerland and New Zealand, as well as interstaters from NSW, ACT, Tasmania and Western Australia.

Course planner Jayne Sales is well credentialled as a former London City Race planner, and she brought her experience to show us what City Racing is all about.  Peter Dalwood, assisted by Pam King, gave us a wonderful map – no easy task given the complexity of the Docklands area.

Early legs took out of Docklands Park and on a tour of Victoria Harbour.  Longer courses ran past Marvel Stadium to Waterfront, and up to the Star Observation Wheel via the confusing two level District shopping mall. We all converged in Batman Hill, where we tackled multiple stairs and ramps, coming to grips with the varying street levels. Then it was south to the river and across a bridge (take your pick) to Southbank.  Around Polly Woodside and the Convention Centre was urban racing European-style as we mingled with, and entertained the crowds.  Back across the river and a bit of Commonwealth Games nostalgia at the Fish (remember when there were 50 magical, shimmering fish floating in the Yarra, back in 2006), before a final lap, then up the grassy slope and into the Finish!

Congratulations to the winners – results and split times below. You can also see the competition maps.

Look out for the 2020 MELBOURNE CITY RACE!

The Melbourne City Race venues will be easily accessible by public transport.  Enjoy all that Melbourne has to offer – fabulous food, amazing shopping, and accommodation for all budgets.

City Races have taken Europe by storm – now it’s Australia’s turn.  Don’t miss the chance to say “I was there in 2019!”

On Friday Oct 11, experience Melbourne’s coolest suburb, Footscray (as named by Time Out magazine). For Sprint Into Spring Race 1, the updated and extended Edgewater map takes in the VU campus, Footscray Park, the river’s edge, and the urban streets.  Choose your own start time between 5.45pm and 7.00pm. Note courses close at 7.30pm.

On Saturday afternoon Oct 12, SIS Race 2 heads to Kensington, an area that’s been crying out to be sprinted on!  It’s a brand new map featuring all that this amazing venue has to offer.  Choose your own start time between 1.30pm and 2.45pm.

Then on Sunday morning Oct 13, don’t miss the chance to race on our shiny new Docklands map, in the first ever Melbourne City Race!  You’ll see the city in a whole new way, as you race from Docklands Park.  Choose your own start time between 10am and 11.30am.

Bring your SIAC stick, as SI Air will be enabled. Don’t have a SIAC yet? Contact Ian Dodd while he has them in stock – ovsi@iinet.net.au

A middle distance urban sprint at Edgewater, right beside the Maribyrnong River, to get you revved up and ready.  Terrain will be a dense network of inner urban streets and lanes, mixed with parkland, and a small but complex campus. This is Race 1 of Melbourne’s Sprint Into Spring 2019 series.

Choose any of the three courses, with distances ranging from 2-5 km.  The race will be held in the early evening. Choose your own start time between 5.45pm and 7.00pm. Courses close at 7.30pm.

Arena: Burndap Park, Farnsworth Ave, Footscray. Toilets will be available nearby. Getting there:

Classic sprint distance race on a complicated mix of small streets and terraced parks in Melbourne’s inner west. Once part of the industrial heartland,  Kensington is now a highly sought after residential green area abounding with cafes.  This is Race 2 of Melbourne’s Sprint Into Spring 2019 series.

Choose any of the three courses, with distances ranging from 2.5-4.0 km. The race will be held in the afternoon. Choose your own start time between 1.30pm and 2.45pm.

Arena: Riverside Park, Kensington. A single portable toilet will be available at the car parking area.
Getting there:

Club tents and Flags
No tent pegs or stakes for club flags are allowed to be placed into the ground in the park. This is a condition of the event permit which we ask you please respect.

The big one!  The inaugural Melbourne City Race is a long distance urban event at Docklands, that will take you to places old and new.  Explore Melbourne’s maritime history, colourful modern architecture, quirky bridges, peaceful parks and trails, and iconic landmarks – this race has it all! From the edges of the Yarra at Southbank to the Melbourne Star Observation Wheel, and lots of hidden gems in between, discover Docklands.

Choose any of the five courses, with distances ranging from 3-10 km. Start times will be from mid morning.  Choose your own start time between 10am and 11.30am.

Parking is limited/expensive, so grab a Myki and save the hassle! Flat rate $10/day parking is available on weekends at The District shopping centre, near the Star Observation Wheel.