Congratulations to Jim Russell on his induction into the Orienteering Australia Hall of Fame, in recognition for his outstanding contributions to all aspects of the sport in Australia. Jim has been involved in orienteering for about 40 years and apart from the first 5 when he was heavily involved in competition he has been involved on the organisation side consistently. 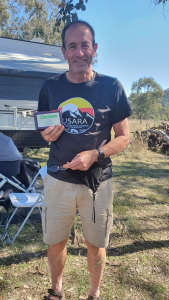 Jim has had an enormously successful coaching record, including as WOC team coach in 2017, 2018, team manager/assistant coach in 2019 and Women’s team coach in 2004 and 2005, where Hanny Allston broke through for a podium finish in the long distance race. Jim was also JWOC coach from 1996-1999, where highlights were top results for Jo Allison and a bronze medal for Troy de Haas, and later was joint coach for JWOC 2007 in Dubbo, coaching Simon Uppill and Vanessa Round to outstanding results. Among Jim’s many other notable coaching contributions are his role as OA Head Coach from 2016-2020 and his work in developing and implementing the process for accreditation of orienteering coaches.

Jim served on the VOA Board for many years, and as VOA Vice President from 1995 to 1998. Similarly Jim has consistently participated on the Bendigo Orienteers committee (including 3 years as president and currently serving as Vice-President).

Jim has been involved in the running of countless events at national, state and local scale. In particular, he has become known for singlehandedly organising the annual Bendigo ToDay event at the start of each season, which has now been held 14 times. Another particularly large organisational feat was his role as Carnival Director for the Bushrangers 09 Australian Orienteering Champs. Jim has also played a significant part in the increased participation of people in Central Victoria to Orienteering through the development of Space Racing and the success of ‘his’ schools and students at the Victorian Primary Schools Championship – it is a great credit to him.

Jim has always wanted to put on the best event possible for the competitors and spectators. He has been a driving force behind the sport’s use of technology in Victoria and Australia, promoting the use of sportident and o-lynx touch, having screens displaying real time results at the Melbourne Sprint & Autumn Bush series, plus every MSW carnival that has been run. Jim also introduced the excellent Pretex paper for map-printing to Australia.

Jim is often the invisible hand behind the things that get done. Without being asked to, and without other people being aware of what he is doing. The things that need to get done, will be done, ready for an event.

High profile contributions get their own recognition but the behind the scenes things often do not. This is what everyone remarks on when they’re asked about Jim. It is all the unsung organising, mentoring, and stepping into gaps, often without needing to be asked, that make him worthy of induction – congratulations Jim.

Congratulations to Warren Key on his induction to the Orienteering Australia Hall of Fame for his achievements as an athlete, with an extraordinary career at both an elite and masters level. Warren has represented Australia at six world championships, from 1979-83 and from 1993-1997, with his best results being 23rd in the Long Distance and 6th in the relay in 1981. Warren had an extraordinarily long career at the top of the domestic elite fields, with highlights being his Australian Long Distance Championships title for M21E in 1995 and 2nd in 2004 (while eligible to run M45), as well as being winner of the inaugural National Orienteering League in 1993.

Renowned for his technical skills, Warren has been dominant in his age classes over the past 20 years and has won numerous World Masters Championships titles. Alongside this, Warren has been the Australian WOC coach for many years, is a regular organiser and course setter for major championships and has recently launched his own compass and orienteering shoe brands. 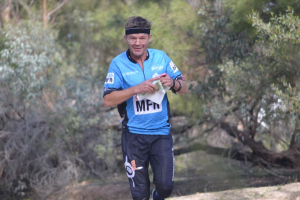 Congratulations to Mike Hubbert, who is the 2021 recipient of Orienteering Australia’s Silva Award for services to orienteering. Mike was presented with his award at the Melbourne City Race on Sunday.

Mike Hubbert has made significant contributions to Australian orienteering at the national level over three periods. The first period was in 1969-70 when orienteering began its path towards becoming a national sport in Australia. Mike was the event secretary for the Upper Beaconsfield event in August 1969 that began this path, and competed in the event, finishing eighth out of 33 starters. In early 1970, he was involved with Tom Andrews, David Hogg and Ron Frederick in establishing the Victorian Orienteering Association and the Orienteering Federation of Australia. Had he not been heading overseas shortly after the inaugural meeting of those bodies, he would have been the logical choice for Secretary.

Returning to Australia around the end of 1972, Mike resumed an active role in Victorian orienteering. His second period of involvement at the national level began in June 1975 when he was elected Secretary of the Orienteering Federation of Australia, holding that position until 1981. That period covered the later years when state associations were being established throughout Australia and were affiliating with the OFA. One off Mike’s challenges, on behalf of the OFA Executive, was coordinating liaison with all of the state associations, which was managed largely through a series of OFA Council Bulletins. During that period, he worked with the OFA President, David Hogg, in starting work on the first OFA Development Plan. In 1976, he was Australia’s first non-competing manager for a World Championships team, when the Championships were held in Scotland.

It was Mike’s initiative earlier that year that started action on the bid to host the 1985 World Orienteering Championships in Australia. He worked with Tom Andrews, Ted Wester and Alex Tarr to develop the bid documentation and, in July 1980, attended the IOF Congress in Germany when the bid was accepted. The hosting of WOC85 proved to be one of the most important events in the development of Australian orienteering.

Mike’s third period of significant contribution began in mid-2004 when he took over the role of Editor of the Australian Orienteer from Ian Baker. Continuing to work with Peter Cusworth, Mike maintained the high quality of the magazine in a role which has continued to the present time.

Throughout Mike’s orienteering career, spanning more than 50 years, he has also been an important contributor at the state association and club level. As a member of Victoria’s first specialist orienteering club, Red Kangaroos, in December 1974 he organised an evening event at Blackburn Lake in the east of Melbourne that was to set the pattern for Melbourne’s series of park/street orienteering events. He was the cartographer for the first coloured map used for an Australian Championships in Victoria (Tallarook State Forest in 1975). These are just a couple of further examples of Mike’s ongoing commitment to orienteering in Australia at all levels.

Thank you for all of your contributions to the sport and congratulations Mike!